Not only does the Dime McCarren 5K raise funds for after school and summer camp, which benefit North Brooklyn Youth; it also salutes those whose leadership has benefited our community.

PS 34, School Settlement Association, and Sumner Community Center will be honored as fundraising champions for the Dime McCarren 5K

For more information and to run or walk in the Dime McCarren 5K: m5k.org

One often sees Luz Rosero on the front lines of rallies and protests that urge our elected powers that be to protect affordable housing and prevent displacement.  She is president of United Neighbors Organization, is active on the Rent Guidelines Board, and is a member of Greenpoint Renaissance Enterprise Corporation (GREC) and of Organizations United for Trash Reduction & Garbage Equity (O.U.T.R.A.G.E.)

Thirty years ago Luz Rosero came from Ecuador to make her home in the heart of Williamsburg. An element of home was here at the start as some of her family lived in the neighborhood.  Her son was born and raised here, she made friends, and in innumerable varied ways as days went by she became more rooted in this community.  It wasn’t until there was an issue with her landlord that she sought to know more about her rights as a tenant, and she went to St. Nicks Alliance for advice. After working out her housing situation, Luz was driven to help others facing displacement via unfair practices or harassment from their landlords, and a community activist was born.

Luz Rosero is an active ambassador who encourages the community to come to the monthly UNO Meetings (3rd Thursday of each month). She regularly knocks on doors visiting tenants to inform them of the meetings, “It’s a great opportunity to discuss what is happening in the community, and at the city and state level,” said Rosero.  She travels to Albany and City Hall for rallies or to meet with elected officials.

Her dedication to community outreach was rewarded with a scholarship from Huairou to the UN Habitat III conference in Quito, Ecuador.  She was inspired by meeting leaders from all over the world and seeing how the struggles of those of low income in NYC were paralleled of that income level all around the world, particularly that low-income families are the first to get hurt during natural disasters and among the last to recover. Even though this trip was some months ago, Luz is still very impressed by a young girl who gave a speech on how girls deserve respect, no matter that they are perceived as small and young, they have the capability to make decisions, and even if these decisions are small they have importance. “This girl was so strong!” said Luz Rosero.

When asked about recent accomplishments and future goals, Luz gave one answer for both: Rent Freeze. She is very happy she played an important part in the mobilization that obtained a rent freeze for the past two years, and she is hoping to accomplish a rent freeze to affect next year’s rent.

Another highlight she shares was that it was through her and UNO’s efforts the NYC Housing Preservation & Development (HPD) dispensed with the original developer of the Greenpoint Hospital.  Toward this end they held several rallies and collected thousands of letters, which were gift wrapped for Christmas, and Luz hand delivered the letters to HPD.

As more luxury condos move into North Brooklyn, the more important Luz feels her efforts are.  “Long-term tenants are getting moved out by landlords who want more money.  People are getting sick with all the stress they feel over it, and government doesn’t seem to do much.”

Luz has seen many of her friends move away. Even her landlord regularly offers her money to move, suggesting she might like to live in Florida.  She also misses the small shops and grocery stores that used to sell products from Ecuador.

When asked what keeps her here, Luz said, “I just like my neighborhood. This is home.” 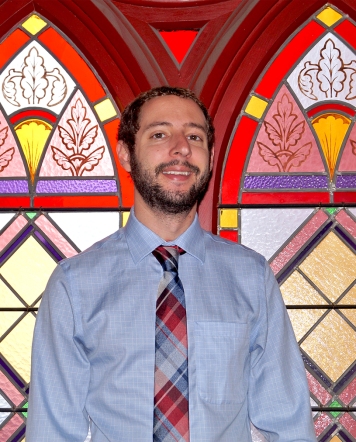 Growing up in Indiana, Pastor Jason Taber’s childhood home sat across from a huge corn field. He revealed community has somewhat of a different meaning in Indiana as opposed to North Brooklyn.  Since moving here directly from graduating the seminary he feels he has learned a broader more direct definition of what community is.  Taber says Williamsburg has taught him how to be a neighbor, how to participate in a neighborhood, how to listen and find out the needs of his community. “I love talking to my neighbors,” Taber said.

His church, St John the Evangelist Lutheran Church (195 Maujer St.) is right across from NYCHA’s Williamsburg Houses.  Taber said every member of his congregation has some connection to public housing be it direct or through friends or family.  Affordable housing is one of the key issues he advocates for.  He recently became secretary of United Neighbors Organization, which hold their meetings at St. John’s on alternate months.  In addition he wrote letters to our senators and Congresswoman Nydia Velázquez asking them to protect the $35Mil in federal aid that goes to city housing that President Trump’s budget threatens to cut.

Currently Pastor Taber is asking the community, via St. John’s facebook page (https://www.facebook.com/sjebrooklyn) to answer: Why is Public Housing is important to me? He plans to collect all the answers toward the end of May and send them to Congress in an effort to encourage them to stand up against this budget cut.

This July, Pastor Taber will be celebrating his 2nd year at St. John’s. As time has passed he sees his congregation getting more involved. He has a very welcoming presence and is constantly looking for avenues of interest to engage the community. For instance Taber mentioned he speaks Spanish, which is very helpful in this neighborhood. He also opened the door to Momentum’s food pantry, which gives out a free meal and grocery items in the church’s basement every Friday from 12pm–3pm. Then there is a drum group that will start on May 3rd and continue for a total of ten Wednesdays at 5:30pm–7pm. This class will instruct 10–18-year-olds to play traditional rhythms from Africa and the Caribbean plus learn some history (Call 718.963.2100 to register).

The pastor is driven to create more options that would open doors to opportunities.  He says even though he is a strong advocate for affordable housing, he would also like to help those discover a path to a future where they could afford a market rate apartment.

Taber is very thankful to those in the community who have helped guide him, especially his ten deacons.  “I wanted to learn from them rather than impose my standards on them,” he said.

When asked how long he would stay at St. John’s he said he and his wife love the neighborhood. Also as he was in the seminary program they’ve moved three times since the start of their marriage and were looking to finally put down roots.

One of PS 34’s fundraising strategies, which landed them in the top three for this year’s Dime McCarren 5K drive, was to put the fun in fundraising. “[We] raffled off unique prizes that we know the children love, [such as] a game night basket which included board games (Scrabble Jr., Monopoly Jr.) and a soccer ball). We also raffled off a family night basket which included 3 movie tickets, a box of popcorn, movie sized candy, and popcorn holders,” said St. Nicks Alliance program director for PS 34, Sandra Serva. The raffles took place for two days during dismissal hours, and they were very pleased by the outcome. Some of the parents are repeat participants in this 5K run or walk that supports afterschool and summer camp. “Parents in the Greenpoint community are very supportive of the School Settlement Association at P.S. 34 afterschool program and are happy to give to the Dime McCarren 5K. Summer camp is a big reason. The parents know that the more money they raise the more trips! ”said Serva.

The children also enjoy rewards for putting their best foot forward. One bonus for being a top fundraiser will be a pizza party on May 1st.

As of this writing, PS 34 has raised $2,000.  “But this is just the beginning of an amazing journey. We will continue to fund raise and reach our goal,” added Serva. 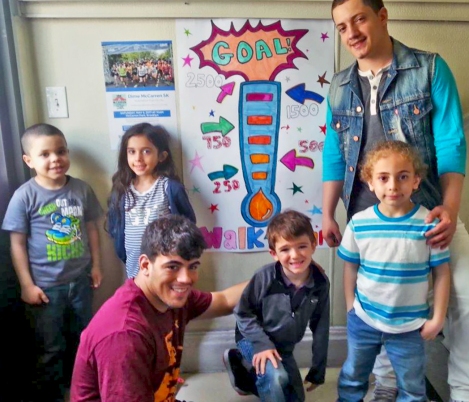 School Settlement’s commitment to the Dime McCarren 5K fundraiser is shown by the unanimous participation: all staff will run or walk. They also expect 7–10 families to walk. Their parents know to look forward to this event. “They know that their support means better trips and transportation,” said Rick Martinez, School Settlement Association program director.

An additional fundraising exercise was the Give A Dime campaign, where all St. Nicks Alliance sites decorated bottles and collected dimes (or above). “Our kids really got into decorating their bottles. One even turned a bottle into a pig. The 5th grade group collected the most, and filled up a bottle which totaled to more than $500,” said Martinez.