The People’s Firehouse, Inc. has been fighting for adequate fire protection for the Williamsburg and Greenpoint neighborhoods since the 1970s. Now that the area’s skyline has climbed there is a need to address potential catastrophic events that a community outfitted to protect more walk-up level buildings would under-reach.

“Since 2005, when the New York City Council passed a large-scale rezoning of Brooklyn 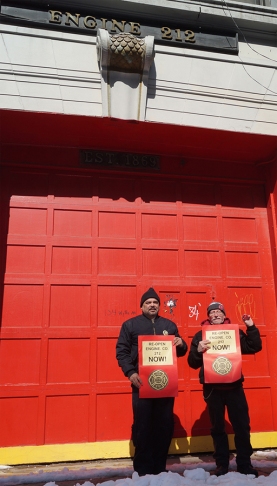 Community Board One’s waterfront, our district population has increased substantially,” remarked Daniel Rivera, Executive Director of PFI. “Residents of Williamsburg alone rose from 155,972 in 1990 to 173,083 in 2010. Yet fire protection services have not increased in Brooklyn CB1 during this period,” he said. Rivera pointed out that during this time, Engine Company 212 in Northside Williamsburg was closed by Mayor Michael Bloomberg in 2003, and Ladder Company 104 on the Southside of Williamsburg was later targeted for closure, but was saved by community mobilization.

People’s Firehouse’s new campaign to increase public awareness of the importance of fire protection services, particularly regarding the new high-rise developments tangibly starts with a button designed by artist Seth Tobocman of the magazine, “World War 3 Illustrated”. 1,000 of these very attractive buttons will be given away to raise public awareness

Residents can pick up their free button at the People’s Firehouse (113 Berry Street) during normal business hours.