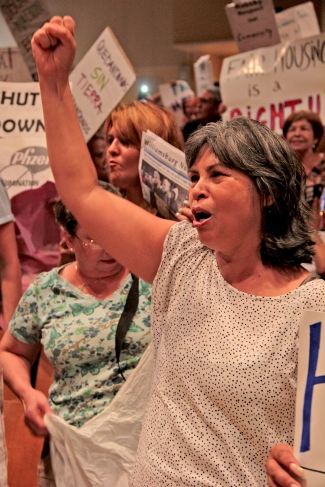 Late September brought controversy with outdoor voices to a public hearing inside PS 318. Members of the Broadway Triangle Community Coalition (BTCC) out-shouted the Department of City Planning’s presentation. This was to be the first stage of an approval process to rezone the part of the Broadway Triangle. The BTCC is a group of over 40 community organizations, legal agencies, churches, educational organizations, community residents, activists, and advocates for fair housing. Their goal is to stop bias in permits and building construction and to advocate for fair housing that represents the area’s largely African American, Latino, and Hassidic communities.

BTTC wishes to halt, what has been under their gaze, decades of housing discrimination against Latino and African-American residents. On observation, low-income residents of color are a rarity in the Broadway Triangle. It happens the Rabsky Group owns the site to be discussed at the public meeting. This is the same group who rankled the community when they purchased the Rheingold Brewery and refused to honor the community benefits agreement executed by the prior owner of the site. To add insult to injury, their plans to give the Rheingold development a European village sensibility has brought disquiet to the Latino community that surrounds it.

Ramon Peguero, Executive Director Los Sures, summed up the reason for their participation at the rally, “Los Sures supports housing developments in Williamsburg that are for all people. There is no room for housing segregation in Brooklyn.”

“Housing discrimination is alive and well in poor and gentrifying communities, notwithstanding the civil rights laws on the books.  The Broadway Triangle is a testament to this, and that’s not something to keep quiet about.” stated Adam Meyers, of Brooklyn Legal Services Corp. A, “We were heard on Wednesday, and it won’t be the last time.”