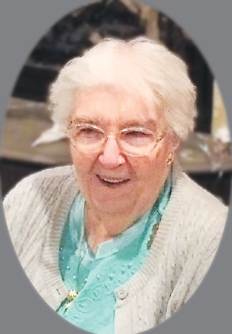 Margaret Kairys was a lifelong resident of Williamsburg. For just short of 88 years, Margie, as everyone called her, became part of the heart of the community from the day of her birth on July 14th 1930. She was well-known as the St. Nicholas School secretary, as she held that role for more than twenty five years.

From the early 70s to the mid 90s Margie worked with the changing leadership at St. Nicholas School and saw many students graduate and go on to high school, college, and their chosen occupations. She was very fond of the students and made great connections between them, their teachers, and parents.

Jennings Hall was where Margie called home for the last twenty-some years. She always said, “I feel safe, living at Jennings Hall”. Warm, fun loving, and caring in nature, she always put others before herself. Yet, she did love to go to Atlantic City and stay at Caesar’s Palace. This was her favorite type of weekend getaway, until she was unable to travel. Margie passed away on June 12, 2018.

Margie was the wife of the late Ray Kairys Sr. She is survived by her son Ray Kairys Jr.; her grandchildren Elise, Joelle, and James Kairys; great granddaughter Jacqueline Sugar; her sister Monica Reilly; and her nieces and nephews.