This limbo isn’t in dance form. Limbo as it applies to the L-train refers to its present situation of waiting for a contractor to be determined and a contract to be signed. The goal is to start the construction April 26*. It was communicated at the March 19th meeting that they would have a contract by the end of March – but the lack of official pen to paper at present prevented some definitive answers from the New York City Transit Authority (NYCT) and the Dept. of Transportation (DOT). The NYCT does state that the daytime train service during the week won’t change once the L Project takes effect.  The noticeable difference will start weeknights from 8 p.m.–5 a.m. and weekends when trains will run at 20-minute intervals between Brooklyn and Manhattan.

Transit reps advised the best way to stay current on the developments in the L Project would be to check its website: https://new.mta.info/l-project or to sign up for email updates. Throughout March the MTA has been addressing the public by presenting at Community Board 1 and scheduled public meetings. One more meeting scheduled with the community on April 8th in Manhattan at the 14th St Y, 344 E14 St (btw 1st & 2nd Aves). They will also present L Project Proposal at more community boards that have residents and businesses directly affected. You can also reference the L Project Proposal here: https://new.mta.info/sites/default/files/2019-02/L_Project_Proposal.pdf

The L Train Coalition has continued to advocate for commuters and businesses especially on keeping some of the L shutdown’s mitigation plans for travel alternatives and for the hiring of an independent consultant to weigh in to the public on safety and environmental concerns when the L Project goes into effect.  At the March 19th  meeting the MTA said there were no plans to add any additional shuttle buses other than the usual one that does the loop touching G and J/M lines, but that there will be increased train service on these lines. No clear answers were given on two top concerns for the L Project’s impact on North Brooklyn: Grand Street and air quality in the subway.

New lane painting on Grand Street started last fall, as that work has to be done in fair weather when the temperature is consistently above 45° F.  Bike lanes, a new parking lane designation, and a bus lane, appear in varying levels of completion. The painting was nearly half done when winter made it too cold to continue, and then the L Shutdown changed to the L Project, which halted most of the alternate travel options that would have gone into effect with a total 18-month shutdown. For the most part, the bus lane looks to be out – and should become a regular all-purpose travel lane. However, the half painted bike lanes and the question as to whether the lost parking spaces will be returned are current considerations. Grand Street businesses report they’ve lost revenue with the new lane configuration; in addition this complicates deliveries from their suppliers with delays and increase in costs if the supplier receives traffic violations. The street has also become somewhat more dangerous with all the confusion the unfinished lanes are causing,

As for air quality, there have been occasional heightened dust levels at the Bedford Stop, occurring usually but not exclusively after full weekend shutdowns.  MTA has announced the levels of dust containing silica particles are too low to be dangerous, yet their workers are seen wearing masks.

*Update:
On Wednesday, April 10, at the Bedford Ave. station Transit Workers for Social Justice protested the health risks: “Cancer causing silica dust, flammable polymers,” etc. ensuing from the Carnarsie Tube construction. These workers are concerned that the silica dust from the overnight and weekend tunnel work won’t be cleared to healthy levels from the air in time for service to return.  This is a potential hazard for both commuters and workers, and more dire for the latter as they will have more exposure. 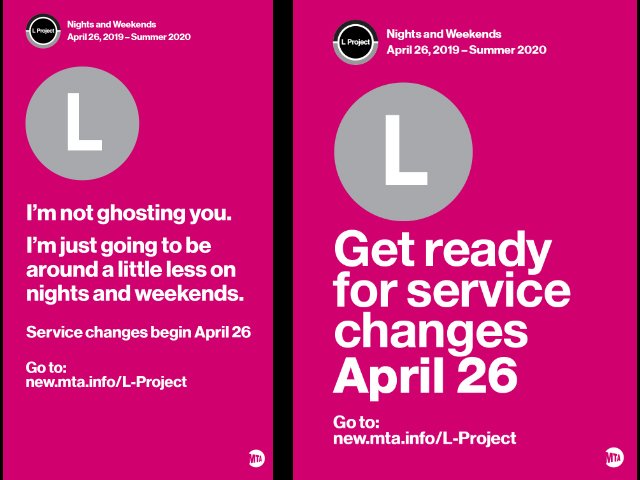 During the same week, the MTA have been posting signs announcing the L Project will go into effect on April 26 and end sometime around Summer 2020