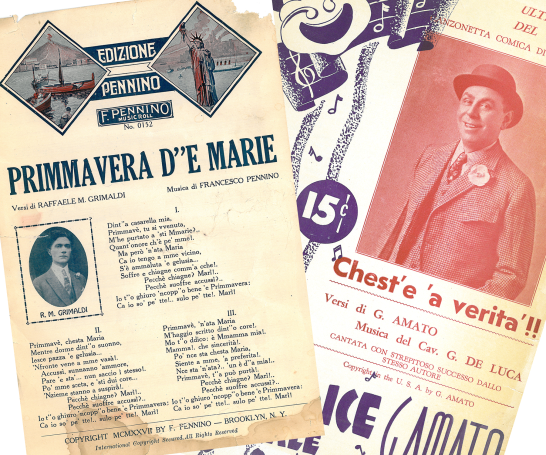 The Italian American contribution to American popular music is indisputable. Mid-century singers like Frank Sinatra and Dean Martin remain beloved and influential performers, but very few people are aware of the vibrant immigrant music scene in the first half of the twentieth century. At that time, New York City boasted a cavalcade of Italian composers, lyricists, musicians, singers, performing venues, and publishing houses. Major recording labels like Columbia and Victor issued a roster of love tunes, comic routines, topical songs, and instrumentals in Italian but also in Neapolitan, Sicilian, and other Italian dialects. Very few today remember the once-adored singers Gennaro Amato, Giuseppe Milano, and Ria Rosa who not only performed locally but also in other parts of the country and abroad. It was in New York City that Salvatore Cardillo and Riccardo Cordiferro wrote the internationally renowned Neapolitan classic “Core ‘ngrato”* specifically for Enrico Caruso who recorded it in 1911.

As part of the Michele Giannattasio Lecture Series at 211 Ainslie Street, on Wednesday, December 4th, Joseph Sciorra, PhD, will speak about the city’s once lively Neapolitan music scene and offer visual and audio musical examples.  This free lecture, titled “Naples in New York” will begin at 7 p.m., and there will be a Q & A following.

Joseph Sciorra, PhD, is the Director for Academic and Cultural Programs at the John D. Calandra Italian American Institute, Queens College. He is also the co-editor of Neapolitan Postcards: The Canzone Napoletana as Transnational Subject.

The eighth installment of the Michele Giannattasio Lecture Series, “Naples in New York” will be presented by Joseph Sciorra, Ph.D. (Calandra Institute at Queens College) on December 4, 2019 at 7 p.m. at 211 Ainslie Street. There will be a Q & A following the presentation.

If you’d like to make reservations please go to: www.naplesinny.eventbrite.com